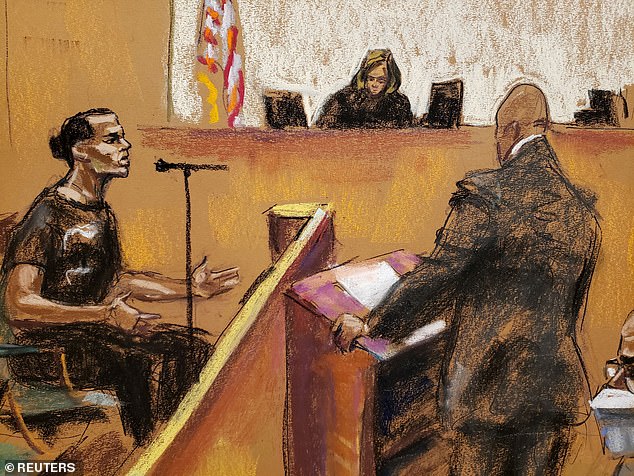 R Kelly trial continued on Monday with the defense calling on Dhanai Ramnanan, and Larry Hood.

Let me start by saying I personally know Dhanai “DA-NI” since about 2003-04. We met outside of a friend’s house in Midlothian, IL. Which I always thought was kinda strange how we met in the first place. He said he just had to meet me, so I agreed, and he pulled up 2 hours later in a Rolls Royce, singing to me.That is also where the LIES began. I knew him only through Myspace, and that he had a song with R.Kelly, called “Work’n Out”. Nothing more.

At the time we met, I was working with a Music Company, Street Fame Entertainment. Along side Rubie Crystle(BUBBA), and E. Dub, putting together events with the singer, R.Kelly. My work relationship with Bubba and Erik eventually fell apart, when Bubba and Rob’s relationship got stronger, and I went onto radio hosting, ect.

Dhanai always had an excuse on why he couldn’t attend the events. Was it age, or was it something else? He always said he was “busy”, but I’m not really sure that was the case..

Dhanai stated in court on Monday that he met R.Kelly in a mall in Albuquerque New Mexico in the mid-00s, but when I met him in 2003, he was already “working” and staying with Rob at his home in Matteson, IL. He didn’t move to New Mexico until after having a connection with the R&B star. He also told me he met the singer in Venice Beach in the the early 00s.

There were many, many times Rob got involved in “our relationship” over the past 15 years. I remember one of those times in 06′ where Rob became very agitated, and got on the phone to yell at me for being 15 minutes late to pick DA-NI up from where they were workin’ out downtown. At the time, I just blew it off. He got in the car, and we left.

I never understood why R.Kelly was so involved with Dhanai, and our relationship as well. At one point, I assumed maybe he was the son of the R&B singer. The way he always protected him, in a sense..

It would almost explain so many strange occurrences over the years I experienced “dating” DA-NI, and even why he took the steps in protecting his identity from me, and now R.Kelly in court..

In over 15 years I never met a single family member, or been to his home. Even though, he has visited every home I owned, met my family, extended family, and even my kids..

But, who knows. After reading all these news articles this week, I honestly don’t know what to believe anymore..Could he have lied on the stand to protect Rob, Is he another one of his victims? Did he lie to me for all these years?

Over the past decade and a half, Dhanai and I would meet up in different locations. We would talk on the phone during tours. We would hang out at the studio, or he would come by me. He was always coming and going from different cities and countries. We tried to make a long distance relationship work, but it never did.

In 2011, he called me to meet him at hotel downtown(Chicago) but when I arrived, I began to ask questions about his identity, and all I got was “Just trust me, I’ll tell you everything in time”. What did that even mean? We ended our connection right there. I went on to date other people, and there was no communication between us.

Until 2013, when Dhanai appeared at my Tinley Park condo, saying he couldn’t take it anymore, and he seemed very upset towards Rob. He turned his phone completely off at the time, but didn’t want to talk about it. He did mention, he just couldn’t take all the rules associated with Rob.

The next morning I overheard R.Kelly clearly yelling at Dhanai when he finally turned his phone back on. The next thing I knew, I had to take him to the train station right away, so he could return to him ASAP.

Further down the road, Rob was going through some things, and was hiding out at the Homewood Suites in Orland Park. The weird thing about this, is that Dhanai had called me before arriving, and told me when they were coming to the hotel. To watch Rob go inside, and wait 30 minutes until he fell asleep to come up to the room. He was staying in the room right next to R.Kelly.

Why we were there he seemed to be very nervous, and told me to be super quite so Rob wouldn’t know I was there with him. I had to sneak in, and then out when leaving.

Why would Rob care if I was with him in the room, and why did he control everything Dhanai did, or didn’t do?

I went to visit him in Dallas, and Colorado in 2018. (Where I went through his glove box to get his real name) Crazy right? I Know…lol.

He then came back to Chicago, and we ended up having another fight about his identity, and I kicked him out the car with his suitcase in hand, Not sure where he went after that.

Two years later, with our conversations being shorter. He finally told me a little about himself, and what he told me actually upset me..So I traveled over 2000 miles, jumping on the next plane out to Denver, rented a car, and drove alone to the NM/CO border for the truth.This was September(2020). I asked him more questions about his real identity, his relationship with R.Kelly of course, and Yep, I got more Stories & Lies!!

I haven’t heard from DA-NI since September of 2020 until TODAY(9/21) (SURPRISINGLY). Here is what are conversation was(Below)..Also a 2 minute conversation that he again choose his loyalty to Rob, and of course, I don’t know what I’m talking about…